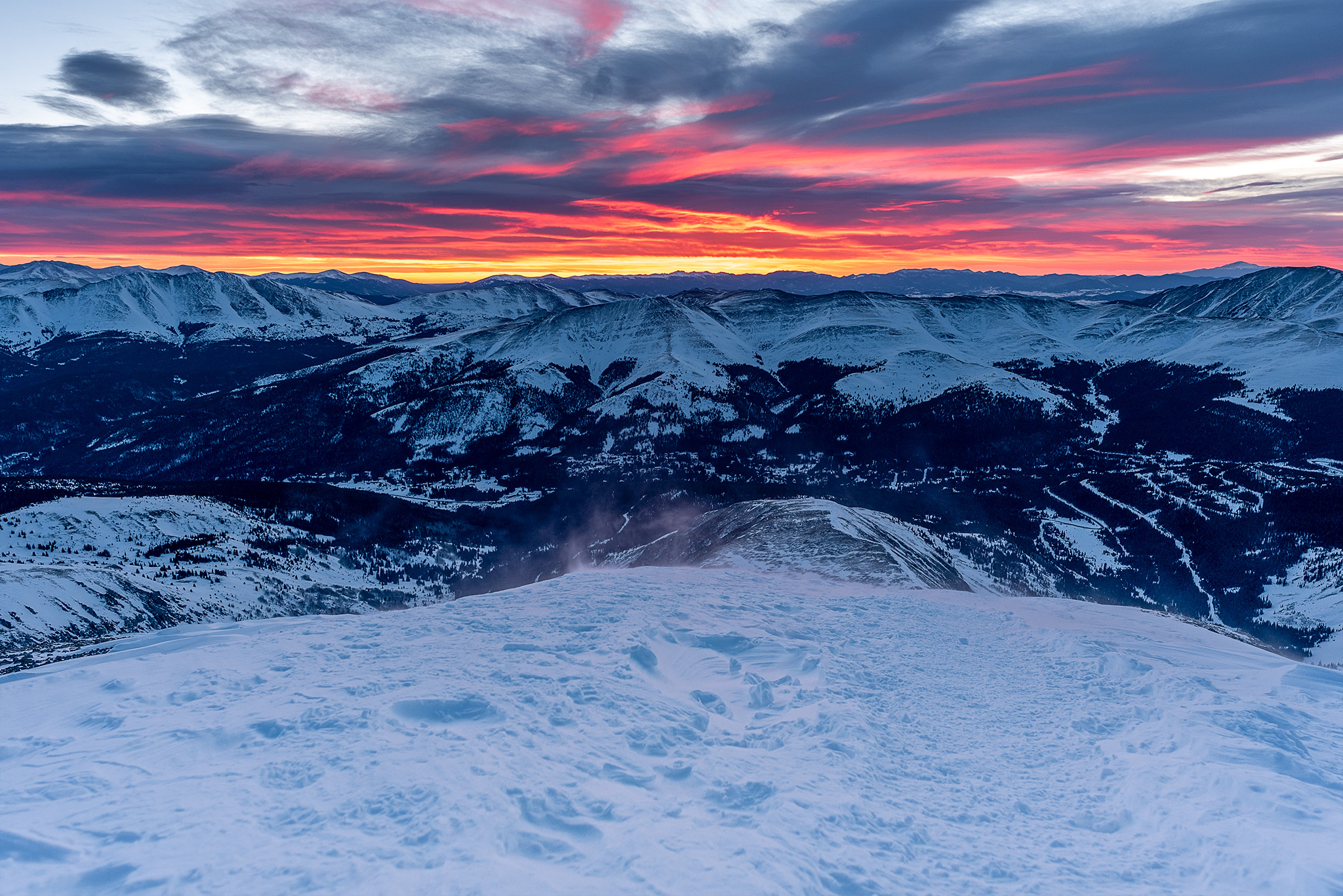 After research and persuasion, we decided on a summit attempt of Quandary Peak via the East Ridge on Leap Day 2020. To up the ante, we planned to ascend our first winter 14er in the dark in order to reach the summit by sunrise.

While Quandary Peak is known as one of the easiest 14ers in Colorado, there are plenty of risks in the winter season. I wouldn’t recommend attempting unless you have experience hiking mountains in the winter and proper gear.


from Denver to Blue Lakes Trailhead


To summit Quandary Peak by sunrise, our Denver departure time was 1:00AM. It was hard to get a good nights sleep due to anticipation of the hike. After gearing up at the trailhead, we were ready to start our hike at 3AM.

Despite limited winds, the temperature at the trailhead was 10° F. The trail was packed down and easy to follow all the way up to the treeline. Once we got to the East Ridge at 13,200 feet, the wind started to pick up. At this point snow goggles were a necessity.

Until the ridge, I was wearing only Valleret photography gloves with hand warmers, and my hands were starting to freeze. The chill in my hands could be attributed to either my lack of liners or the use of my metal trekking poles. After donning liners and ditching the trekking poles, my hands warmed up.  In retrospect, I should’ve put the liners on at the trailhead; putting the liners on in the dark with the wind howling was a pain in the ass. Avoidable mistake. Lesson learned.

As the sun peeked behind peaks to the East, we ascended the first false summit of Quandary Peak.

On the second false summit, I grabbed my Really Right Stuff ground level tripod and my Acratech Ballhead and started shooting the sunrise.The GoPro Hero 7 made an appearance for the first time in 3 hours. The close proximity to the summit and the sunrise had my adrenaline pumping; from there it was a short 5-10 minute hike to the top of Quandary Peak. Made a video of our hike up Quandary Peak, starting right before the summit, to the top, and descending on the way down. Check it out below, it’ll only take about 14 minutes… 6:20AM marked our arrival time at the true summit; the windchill was a crisp -10° F. It took us a little over 3 hours from the trailhead to get to the top. The views, and colors in the sky were unreal. At the west end of the summit, we took a few minutes to record our surroundings with the GoPro, and take some selfies with the Nikon D750. Despite the wind gusts of 30mph, the ground-level tripod with the camera mounted stood up to the challenge. After spending 20 minutes on the summit, it was time to start the descent. The GoPro Hero 7 was unresponsive and froze due to the temperature. After changing the battery (not easy) on the summit, the Hero powered up again. The descent was a sense of relief; we could see where we were going! The sun was rising, as was the temperature. We were glad to start our hike early, as the conditions of the trail on the way down had declined due to blowing snow.  Visibility on the mountain was still prime as there were no clouds near us. Preparation for a Colorado winter 14er


Two weeks prior, I started planning for this hike. On one hand I was excited to try my first winter summit. Conversely, I was wary of unpredictable high winter winds. I checked the weather pretty much every day up until the day of the hike. Everything looked good. As a photographer chasing landscapes, visibility was important to me and the weather prediction was in my favor. Preparation played a major part in this successful winter summit of Quandary Peak. Here’s a video of all the hiking, camera, clothing and gear that I brought with me.

True to form, it was cold, the wind was relentless, my hands were freezing and my feet were completely numb. However, the visibility and the views from the summit of Quandary Peak vastly outweighed any discomfort. There were times during the hike through the frigid darkness that I was pushed out of my comfort zone. This was a harder hike than my sunrise summit hike on Mt. Elbert, although the season was prime for 14ers then.

The overall experience was amazing. It keeps me pushing to see more of what Colorado offers in outdoor trails, mountains and alpine lakes. I highly recommend this hike in the winter for the experienced adventurer.